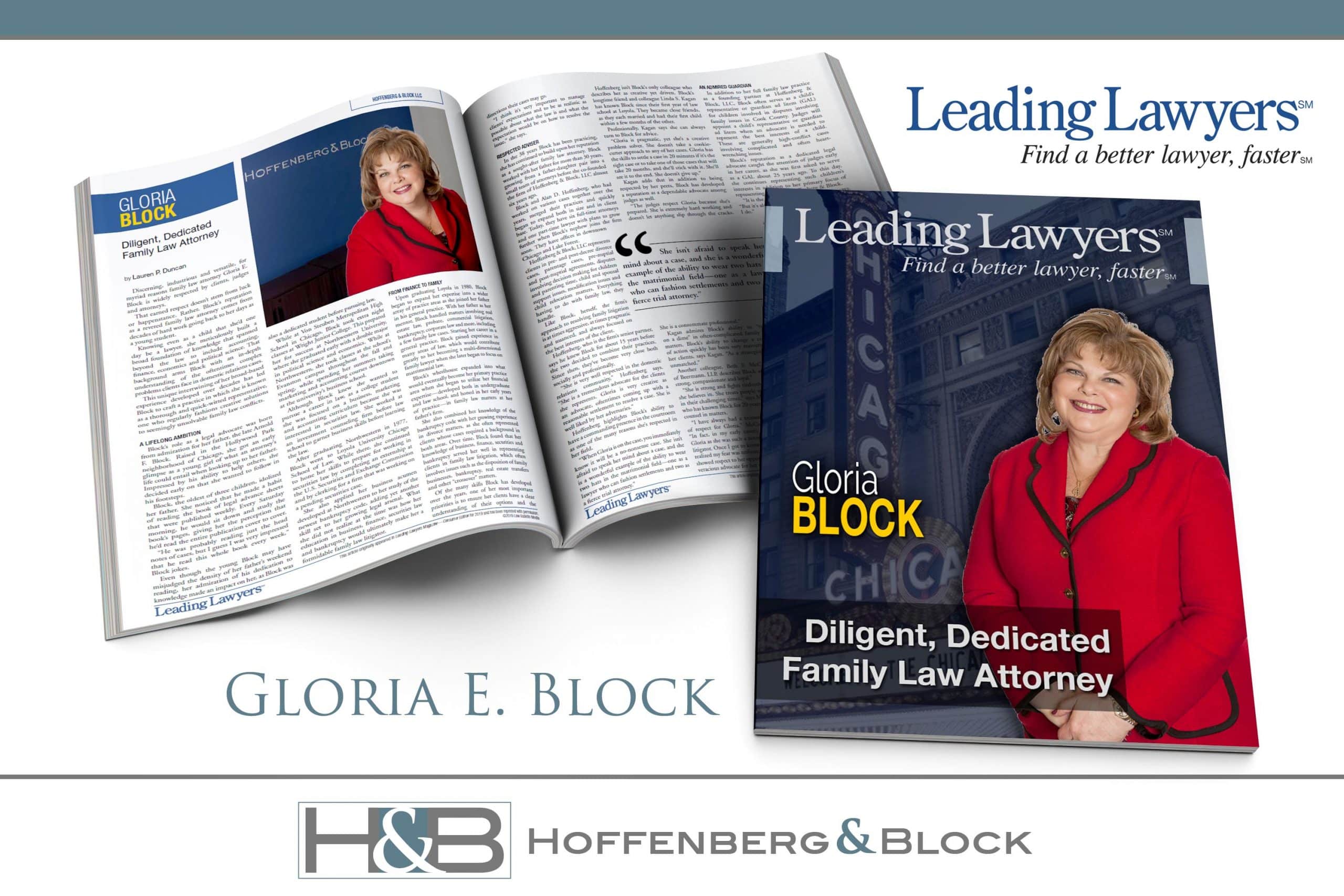 That earned respect doesn’t stem from luck or happenstance. Rather, Block’s reputation as a revered family law attorney comes from decades of hard work going back to her days as a young student.

Knowing even as a child that she’d one day be a lawyer, she meticulously built a broad foundation of knowledge that spanned beyond the law to include accounting, finance, economics and political science. That background arms Block with an in-depth understanding of the oftentimes complex problems clients face in domestic relations cases.

This unique intertwining of her broad-based experience developed over decades has led Block to craft a practice in which she is known as a thorough and quick-witted representative, one who regularly fashions creative solutions to seemingly unsolvable family law conflicts.

“She isn’t afraid to speak her mind about a case, and she is a wonderful example of the ability to wear two hats in the matrimonial field—one as a lawyer who can fashion settlements and two as a fierce trial attorney.”

Block’s role as a legal advocate was born from admiration for her father, the late Arnold F. Block. Raised in the Hollywood Park neighborhood of Chicago, she got an early glimpse as a young girl of what an attorney’s life could entail when looking up to her father. Impressed by his ability to help others, she decided early on that she wanted to follow in his footsteps.

Block, the oldest of three children, idolized her father. She noticed that he made a habit of reading the book of legal advance sheets that were published weekly. Every Saturday morning, he would sit down and study the book’s pages, giving her the perception that he’d read the entire publication cover to cover.

“He was probably reading just the head notes of cases, but I guess I was very impressed that he read this whole book every week,” Block jokes.

Even though the young Block may have misjudged the density of her father’s weekend reading, her admiration of his dedication to knowledge made an impact on her, as Block was also a dedicated student before pursuing law.

While at Von Steuben Metropolitan High School in Chicago, Block took extra night classes at Wright Junior College. This prepared her for success at Northwestern University, where she graduated early with a double major in political science and economics. While at Northwestern, she took classes at the school’s Evanston campus throughout the fall and spring, while spending her summers taking marketing and accounting courses downtown at the university’s business school.

Although Block knew she wanted to pursue a career in law, as a college student she was focused on a business, marketing and accounting curriculum because she was interested in securities law. She worked at an investment counseling firm before law school to garner business skills before learning the law.

After graduating Northwestern in 1977, Block went to Loyola University Chicago School of Law. While there, she continued to hone her skills to prepare for working in securities law by completing an externship at the U.S. Securities and Exchange Commission and by clerking for a firm that was working on a pending securities case.

She also applied her business acumen developed at Northwestern to her study of the newest bankruptcy code, adding yet another skill set to her growing legal arsenal. What she did not realize at the time was how her education in business, finance, securities law and bankruptcy would ultimately make her a formidable family law litigator.

FROM FINANCE TO FAMILY

Upon graduating Loyola in 1980, Block began to expand her expertise into a wider array of practice areas as she joined her father in his general practice. With her father as her mentor, Block handled matters involving real estate law, probate, commercial litigation, bankruptcy, corporate law and more, including a few family law cases. Starting her career in a general practice, Block gained experience in many areas of law, which would contribute greatly to her becoming a multi-dimensional family lawyer when she later began to focus on matrimonial law.

Block’s wheelhouse expanded into what would eventually become her primary practice area when she began to utilize her financial expertise—developed both in undergraduate and law school, and honed in her early years of practice—in family law matters at her father’s firm.

She also combined her knowledge of the bankruptcy code with her growing experience in divorce matters, as she often represented clients whose cases required a background in both areas. Over time, Block found that her knowledge of business, finance, securities and bankruptcy served her well in representing clients in family law litigation, which often involves issues such as the disposition of family businesses, bankruptcy, real estate transfers and other “crossover” matters.

Of the many skills Block has developed over the years, one of her most important priorities is to ensure her clients have a clear understanding of their options and the directions their cases may go.

“I think it’s very important to manage clients’ expectations and to be as realistic as possible about what the law is and what the expectation would be on how to resolve the issue,” she says.

In the 38 years Block has been practicing, she has continued to build upon her reputation as a sought-after family law attorney. Block worked with her father for more than 30 years, growing from a father-daughter pair into a small team of attorneys before she co-founded the firm of Hoffenberg & Block, LLC almost six years ago.

Block and Alan D. Hoffenberg, who had worked on various cases together over the years, merged their practices and quickly began to expand both in size and in client base. Today, they have six full-time attorneys and one part-time lawyer with plans to grow further when Block’s nephew joins the firm soon. They have offices in downtown Chicago and Lake Forest.

Like Block, herself, the firm’s approach to resolving family litigation is at times aggressive, at times pragmatic and nuanced, and always focused on the best interests of the client.

Hoffenberg, who is the firm’s senior partner, says he knew Block for about 15 years before the two decided to combine their practices. Since then, they’ve become very close both socially and professionally.

“She is very well respected in the domestic relations community,” Hoffenberg says. “She is a tremendous advocate for the clients she represents. Gloria is very creative as an advocate, oftentimes coming up with a reasonable settlement to resolve a case. She is well liked by her adversaries.”

Hoffenberg highlights Block’s ability to have a commanding presence in the courtroom as one of the many reasons she’s respected in her field.

“When Gloria is on the case, you immediately know it will be a no-nonsense case. She isn’t afraid to speak her mind about a case, and she is a wonderful example of the ability to wear two hats in the matrimonial field—one as a lawyer who can fashion settlements and two as a fierce trial attorney.”

Hoffenberg isn’t Block’s only colleague who describes her as creative yet driven. Block’s longtime friend and colleague Linda S. Kagan has known Block since their first year of law school at Loyola. They became close friends, as they each married and had their first child within a few months of the other.

Professionally, Kagan says she can always turn to Block for advice. “Gloria is pragmatic, yet she’s a creative problem solver. She doesn’t take a cookie cutter approach to any of her cases. Gloria has the skills to settle a case in 20 minutes if it’s the right case or to take one of those cases that will take 20 months, and she’ll stick with it. She’ll see it to the end. She doesn’t give up.”

Kagan adds that in addition to being respected by her peers, Block has developed a reputation as a dependable advocate among judges as well.

“The judges respect Gloria because she’s prepared. She is extremely hard working and doesn’t let anything slip through the cracks.

She is a consummate professional.” Kagan admires Block’s ability to “turn on a dime” in often-complicated family law matters. Block’s ability to change a course of action quickly has been very reassuring to her clients, says Kagan. “As a strategist, she’s unmatched.”

“She is strong and fights tirelessly for what she believes in. She treats people with respect in their challenging times,” says McCormack, who has known Block for 20 years as opposing counsel in matters.

“I have always had a tremendous amount of respect for Gloria,” McCormack relates. “In fact, in my early career, I used to fear Gloria as she was such a notoriously tenacious litigator. Once I got to know her more fully, I realized my fear was unfounded. Gloria always showed respect to her opponents while being a veracious advocate for her clients.”

In addition to her full family law practice as a founding partner at Hoffenberg & Block, LLC, Block often serves as a child’s representative or guardian ad litem (GAL) for children involved in disputes involving family issues in Cook County. Judges will appoint a child’s representative or guardian ad litem when an advocate is needed to represent the best interests of a child. These are generally high-conflict cases involving complicated and often heart wrenching issues.

Block’s reputation as a dedicated legal advocate caught the attention of judges early in her career, as she was first asked to serve as a GAL about 25 years ago. To this day, she continues representing such children’s interests in addition to her primary focus of representing clients of Hoffenberg & Block.

“It is the most difficult work I do,” she says. “But it’s also some of the most rewarding work I do.”

Although she’s not a psychologist or mental health professional, Block strives to do her best when it comes to assessing the best decisions to make regarding the mental, emotional and physical health of the children she represents.

When it comes to representing the best interests of children and families involved in disputes, the importance of a dedicated and compassionate legal representative cannot be understated.

According to Jason G. Adess, a family law attorney at Berger Schatz who has known Block for more than 20 years, the role of the guardian is critical in helping a judge make a decision in often extraordinarily difficult circumstances.

Her reputation as both a GAL and an accomplished family law attorney is why Adess respects Block’s recommendations in cases involving his clients when she serves as a guardian.

“Whether her recommendations are for my client or are against my client, based upon the quality of work that she does, it’s very easy to get clients on board with what she recommends because of the quality of the work she does,” Adess says.

“The fact that judges so often rely on her and follow her lead speaks volumes about the level of expertise she brings and her depth of experience,” Adess adds.

Block and her husband Harold, who is a retired pharmacist, live in Buffalo Grove. They enjoy playing golf and traveling. They have two grown children, a son, who is an election law attorney, and a daughter, who is an artist and in school with plans to become a teacher.

Hoffenberg and Block LLC is a full-service Chicago Family Law Firm serving clients from Cook, Lake, DuPage and McHenry counties in Illinois for over 45 years. The firm dedicates its practice exclusively to matters of family law, such as Divorce, Child Custody and Visitation, Spousal and Child Support, Prenuptial Agreements and Modification and Enforcement of existing judgments. A no obligation case evaluation is available to all new clients. Hoffenberg and Block LLC can be reached directly by calling 312-853-8000, or visiting ChicagoFamilyLawyer.com, where more information on their services and attorneys is available.