As of June 1, 2014, Illinois recognizes same-sex marriages. The previously in place Civil Union Act remains in effect, which allows two adults of either the same or opposite sex to enter into a Civil Union. Furthermore, the newest Act in place as of June 1, 2014, allows civil unions to be converted to marriages if certain steps are taken which are delineated fully in a recent article published to our Family Law Blog entitled:  New Illinois Same-Sex Marriage Laws.

At Hoffenberg & Block, we provide professional and individualized legal representation for a wide range of family law concerns, including same-sex marriages and civil unions. Our firm has dedicated considerable time in order to become knowledgeable and up to date in this relatively new area of family law.

We represent same-sex couples in Chicago, including communities in Cook, Lake, DuPage, Will and McHenry Counties in Illinois.

Our Chicago Same-Sex Marriage Attorneys are fully prepared to advise on even the most complex legal matters. We will help you understand your rights and options within our state, and also how that might be affected should you decide to move out of state. Whether you want to form a civil union or same-sex marriage or are in need of a dissolution, we will take the time to fully understand your situation and provide honest advice regarding your options.

To discuss your civil union or same-sex marriage concerns with an experienced family lawyer in Chicago, contact Hoffenberg & Block today at 312-853-8000 or Click Here to schedule a confidential case evaluation. 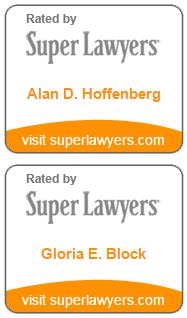 “Gabriela navigated my complicated child support case with brilliance and resourcefulness. Her deep knowledge of child support law produced a positive outcome for me and my child. Gabriela was there every step of the way to advocate for me and was able to communicate the process in clear terms. I can’t imagine there would be another lawyer who would have worked as hard for me as Gabriela did.
”

“Gabriela is highly knowledgeable in family. She was able to help me through my divorce all the while listening to my specific needs and interests and advising me with her expertise along the way. Gabriela is very professional and thorough.”

“Ms. Asrow is an absolutely phenomenal lawyer. Not only is she capable, intelligent and efficient with your time, she is also someone you can trust to make sure you understand every facet of your case. She was an absolute joy to work with, even when the circumstances were stressful and difficult. Thank you Gabriela!”

Gabriela and Gloria worked diligently on my case…

“Gabriela and Gloria worked diligently on my case during a tough Covid environment in 2020. They provided many options for me to get through the process of my divorce. They both paid attention to details and was always available to provide answers for my questions.”

I am very glad I choose H&B to represent me…

“I really appreciate everything Gloria and Julia has done for my case. I am very glad I choose H&B to represent me in my case.”

I appreciate your honest and complete approach…

“Thank You! After going through three Officers of the Court before you, that had no interest in completing the work they were paid to do, I was beginning to loose hope for justice. Hoffenberg and Block’s communication and follow through have exceeded my expectations. You have completed everything as you said. I appreciate your honest and complete approach in solving all issues.”